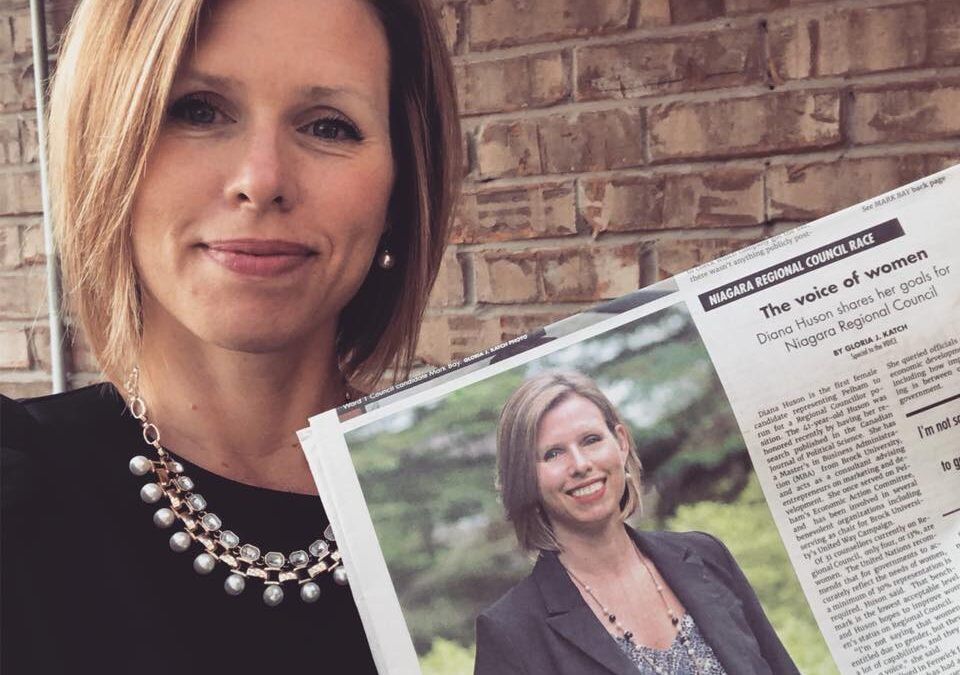 Pointing out that it’s “time for change,” Fenwick resident Diana Huson announced Tuesday, July 24 that she is running to become the Regional Council member for the Town of Pelham in October’s municipal elections.

If elected, she would be the first woman to hold the position. Of the 31 current Regional Council members, only four are women.

“I’m running for Pelham’s regional seat because I’m passionate about our beautiful community and, like many people, I’m disappointed with our Regional Council,” said Huson, 41. “We’ve seen out-of-control spending on councillor expenses, a council that voted themselves a pay raise, and a divide-and-conquer mentality that undermines our ability to attain the things that our community needs the most.”

Huson said the outgoing term of Niagara Regional Council has painted a negative picture of Niagara in a very public way.

“That’s not what we need. We need cooperation, collaboration and team work,” she said.

Huson has resided in Niagara her entire life, living in Fenwick for the past 10 years with her husband and daughter. During this time she has worked for Brock University in administration.

She holds an MBA from the Goodman School of Business and a Master’s Degree in Political Science from Brock University, where the focus of her academic research was economic development in Niagara and institutional change.

“I found that political infighting was especially detrimental to the needs of the Region,” said Huson. “The province will defer any important decisions, or more importantly funding, until we have consensus across our municipalities. If we can’t agree on our priorities, the funding goes elsewhere. Pelham needs a team that works together to get action on important social and economic issues.”

No stranger to working on committees, Huson served as the Chair of Brock’s United Way Campaign for more than four years. She has also served on both the United Way

of South Niagara committee, Pelham’s Economic Action Committee and is currently Director of Communications for Momentum Choir, an organization that focuses on promoting and nurturing adults with disabilities through music.

“I’m very dedicated to helping those in our community who need it the most,” she said, adding that watching her father struggle with cancer treatment a few years ago was an eye-opening experience. “I realized how vital supplemental health care services are to the older population in Niagara. As our population ages, seniors will need many more support services through public health and non-profit organizations – especially if they don’t have a strong support system around them.”

Huson is also a champion of entrepreneurship and small business.

“Over the years I’ve had my own business as a consultant and my husband has operated a business in Fenwick for two decades,” she said. “Pelham has a fairly large base of entrepreneurs and small to medium sized businesses. I think we need to support them and encourage more people to think about self-employment as a realistic option for the future.”

If elected, Huson promises to never vote herself a raise and to consult her constituents on important issues.

“Our regional representative must speak for the people. I plan to better engage with voters over their needs and wants moving forward,” she said. “I’m looking to voters to tell me what their priorities are for the campaign.”

For more information or to request an interview with Diana Huson, please contact her directly at diana.huson@outlook.com